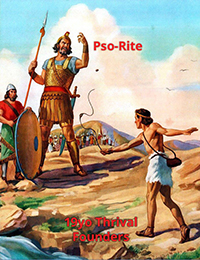 The owner of Pso-Rite, Mackenzie Mollohan, sued Thrival and it's three founders individually on 3/22/2021 for patent infringement (on a design patent) and trademark violations.  This is Pso-Rite’s third lawsuit against a competitor in only 15-months.  Pso-Rite also sued Trainingmask LLC on Dec. 27, 2019 and Exerscribe Inc. (the maker of the Hip Hero product) on Nov. 9, 2020.  Mr. Mollohan sues anyone he perceives as a threat to his business. These types of lawsuits are both frivolous and a business strategy where an established company sues a newcomer to prevent it from gaining traction. The intention of Mr. Mollohan is to try and drive Thrival out of the marketplace with his attorneys. In fact, Pso-Rite did succeed in driving Trainingmask LLC out of the marketplace which has clearly emboldened him to employ this same strategy against Exerscribe LLC and Thrival. Among their many allegations and demands, Pso-Rite is essentially demanding that we discontinue making and selling our Bullseye and Meat Grinder attachment heads.  This is not going to happen. In fact, we will be making some counterclaims against both Pso-Rite as an entity and Mr. Mollohan for his egregious personal conduct.

Some background:  Five days after Thrival was launched on 11/25/2020, Mr. Mollohan impulsively flew to Copper Mountain, CO in the hopes of confronting Cam and Dom (two 19yos) in person.  Mr. Mollohan located ski racers who knew Cam and began dropping his name, even going so far as to ride the lift with Cam’s friends and make disparaging comments to them about him.  Upon learning that Cam and Dom weren’t where he thought they were going to be (presumably Mr. Mollohan) proceeded later that same day to repeatedly attack Thrival, Cam and Dom on their respective Instagram accounts while posing as someone else. This Pso-Rite-affiliated person (posing as someone else) among numerous insults, stated that the Thrival product was a “SCAM” and a “paperweight” and that Thrival’s teenage founders were “chumps” and “no where near mature enough to run a business." This Instagram account with 449 followers at the time mysteriously disappeared after Thrival notified Pso-Rite’s attorneys that a Pso-Rite-affiliated person was using this account to attack Thrival and it’s founders. We have the receipts on all this behavior including eyewitnesses and screenshots, and will be able to prove it in court.  Ratcheting up it’s intimidation campaign, Pso-Rite sent copies of their Demand letter to three of Thrival’s sponsored athletes in a blatant attempt to intimidate them. Most recently, Mr. Mollohan decided to improperly sue the three founders of Thrival individually instead of suing the business entity only (as would have been proper). By now, you should be getting a feel for the intimidation tactics that Thrival and it’s founders are up against.
‍
Pso-Rite has incorrectly contended that their '479 design patent covers any self-massage product that has “two peaks extending vertically from a horizontal base”.  This is not the correct application of design patent law.  With design patents, you merely get a right to protect a specific ornamental design, or in this case, shape of a specific design.  No functionality or concepts are protected.  And therefore, if Pso-Rite plans on making contentions like that to a Jury or Judge, we will be more than happy to invalidate their lone design patent on the Pso-Rite. Below is a Patent Application from 2005 for a self-massage tool with “two peaks extending vertically from a horizontal base.” This patent application was filed more than 10-years before Pso-Rite applied for its design patent.  If Pso-Rite continues with their contention in court, their design patent will very likely be found invalid.

Sarah Burstein, an internationally-recognized expert in design patents and a law professor at the University of Oklahoma, recently independently commented on both Pso-Rite’s lawsuit against Exerscribe and Pso-Rite’s lawsuit against Thrival.  For the Exerscribe lawsuit, Ms.Burstein replied to a person asking, “Is it a problem for the case that the shapes are not actually that similar?” with “Yes. It’s a big problem.  The design patent covers the claimed shape, not – as the plaintiff seems to think –the way the product works or the larger design concept” (see https://twitter.com/search?q=v.%20Exerscribe&src=typed_query). For the Pso-Rite lawsuit against Thrival, Ms. Burstein described it as “another example of the concept fallacy in design patent litigation” and “more concept fallacy from Pso-Rite”.  Professor Burstein defines “concept fallacy” in design patent litigation as “where the design patent owner (and/or the owner’s counsel) seems to be under the mistaken impression that design patents cover general design concepts instead of specific designs” (see https://twitter.com/search?q=v.%20thrival%20llc&src=typed_query). Pso-Rite’s attorneys have repeatedly been put on notice that they are misinterpreting and misusing design patent law in their Pso-Rite lawsuits. We have to conclude at this point that it is deliberate strategy on behalf of Pso-Rite for driving competitors out of the marketplace and not a mere misunderstanding of the law.

And just to put the cherry on top of the sundae, Exerscribe was issued a design patent for their Hip-Hero product over Pso-Rite’s ‘479 design patent on 12/15/2020. For those of you unfamiliar with patent law, this means the US Patent & Trademark Office decided just a few months ago that Pso-Rite’s ‘479 patent didn’t cover the Hip Hero product and that Exerscribe deserved their own design patent. You, an ordinary observer, can see for yourself whether you can distinguish between the Hip Hero and the Pso-Rite in the pictures below.

With this in mind, take a look at the pictures below.  Pso-Rite is contending that the shapes of these two products are so similar that ordinary observers would be unable to distinguish between them.  If you have eyesight, you should be getting a feel for how truly frivolous this lawsuit is. Pso-Rite’s real strategy is to try and prevent these two entrepreneurial 19yos – his most serious competition to date – from competing with Pso-Rite.

The strategy of trying to intimidate Thrival and its founders (whether in person, hiding behind someone else’s Instagram account or through attorneys) will (we predict) ultimately backfire spectacularly. The only way to take on a bully is by refusing to back down and by punching back. To use an analogy, this is a classic David vs. Goliath fight where the two teenage founders are clearly the underdogs.  Sometimes it’s not about the dollars-and-cents but instead about standing for principles.
‍
Ultimately, what this is really about is whether a superior product described by one of our customers as “This is life changing. Not kidding. Thank you!” gets to remain on the market.  We will keep this page updated by posting periodically regarding developments in this lawsuit. Thank you for taking the time to read this.